Lessons learned and options for improvement 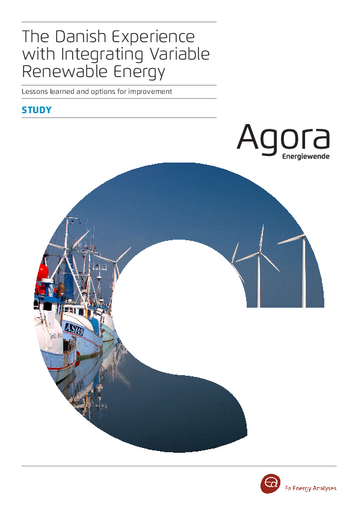 In 2014 wind energy alone supplied 39 percent of Danish electricity demand. Danish energy supply is moving away from a system based on fossil fuels, especially coal, toward an entirely renewable energy based system. In fact, Denmark is striving for complete independence from fossil fuels by 2050. In the electricity and heating sectors, fossil fuel phase-out is expected even earlier. Denmark aims to meet 50 percent of electricity demand with wind power by 2020.
Thus, increasing the integration of wind energy is one of the key challenges in the Danish renewable energy transition, the so-called grøn omstilling.

What steps has Denmark taken to enable the deployment of ever-greater shares of wind power? What flexibility measures has the country implemented to keep its power system reliable and stable? And can other European countries learn from the Danish experience – based on the understanding that sooner or later, they will face the same challenges? The following report, which was drafted by the Copenhagenbased research and consultancy company Ea Energy Analyses, takes an in-depth look at the Danish experience with integrating wind power. It is hoped that the lessons learned in Denmark in recent decades can serve as a valuable aid to other countries in their efforts to transform their energy systems.