The climate ambition gap is beginning to close, now the climate action gap must quickly follow. 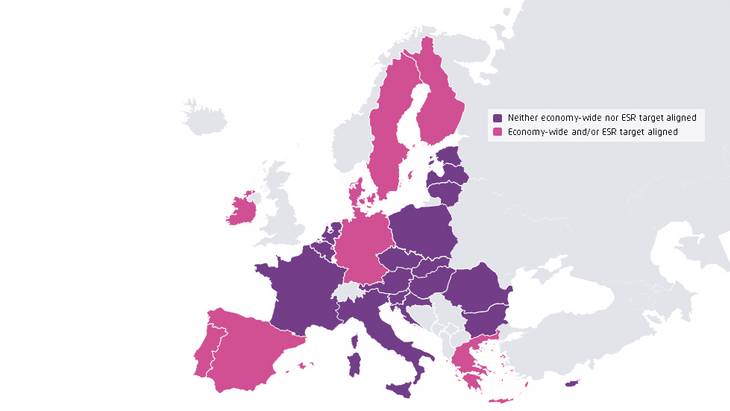 The provisional agreement on a new EU Climate Law means that the EU’s 2030 target of at least 55 percent net domestic greenhouse gas reductions compared to 1990 levels will become binding in some weeks. This new legal framework gives the European Commission strong political backing to fully align its upcoming ‘Fit for 55’ package with this ambition. It also requires Member States to align their national objectives with the new target. A new analysis by Öko-Institut shows that roughly one third of Member States have so far aligned their national objectives with the EU’s higher ambition, while integrated planning on how to reach those objectives is lagging behind. With less than ten years for the EU’s new climate target to be achieved, Member States will need to increase national climate targets and begin revising implementation plans well before the ‘Fit for 55’ package is concluded.

At the end of June, the Council of the EU and the European Parliament formally adopted a new EU Climate Law. At its core, the EU climate law enshrines into law the EU’s new 2030 climate objective of at least 55 percent net domestic greenhouse gas reductions compared to 1990 levels. But the agreement also specifies how this net reduction target should be achieved. In particular, it sets a maximum contribution of net removals towards this target of -225 million tonnes CO2eq, which aligns closely with detailed scenario analysis accompanying the European Commission’s target proposal from September 2020. Thus, the agreed framework already provides a clear basis for assessing the likely consequences for Member State contributions to the EU’s collective targets and how current national targets and plans stack up.

Agora Energiewende has released a new analysis by Öko-Institut that provides a first quantitative estimate of the national contributions we can expect from Member States if the EU is to deliver on the EU’s 2030 climate target, as well as an overview of existing Member State targets and emissions projections. The analysis assumes that the EU’s target framework aims at delivering emissions reductions in line with the minimum target set out in the EU Climate Law (-53 percent). The analysis also summarizes and documents all known economy-wide or non-ETS sector targets at national level, as well as the projected emissions reductions from planned measures reported by Member States.

1. The EU’s ‘climate ambition gap’ is beginning to close: With the outgoing German government having recently decided to increase Germany’s 2030 greenhouse gas target to a 65 percent reduction compared to 1990 levels, Germany joins a small but growing group of EU Member States that have set themselves national climate targets consistent with the EU’s increased level of ambition. This group includes Denmark, Finland, Germany, Greece, Ireland and Portugal based on economy-climate targets, and arguably also Luxembourg, Spain and Sweden based on national targets for the non-ETS sectors. These nine Member States make up only one third of the EU’s twenty-seven-member bloc, but also 40 percemt of its population, 47 percent of its GDP and 42 percent of its total emissions (see figure 1 in the download section below).

2. The EU’s ‘climate action gap’ remains worryingly large: Far fewer Member States have developed integrated national energy and climate plans with concrete policies and measures for delivering the EU’s higher climate ambition, compared with setting national level targets. Currently only two Member States – Greece and Portugal – have submitted National Energy and Climate Plans or emissions projections for planned policies and measures that are aligned with the EU’s new 2030 climate target (see figure 2). Based on these plans, the climate action gap between planned and required measures could be as high as 192 million tonnes in 2030 (equivalent to 8 percentage points in emissions reductions relative to 2005 levels).

It is not surprising that Member State planning and EU-level ambition currently diverges given that:

But the analysis also reveals that Member States have their work cut out for them in aligning their detailed economy-wide National Energy and Climate Plans with the EU’s new climate ambition in the coming years. After years of insufficient climate action and with less than ten years for Member States to deliver on the newly set goals, countries will have to act quickly to put in place the policy frameworks and delivery mechanisms to make them a reality.

By developing coherent climate plans in line with higher ambition Member States will be better able to identify spending priorities and the policies needed to deliver clean investments. This is particularly important for large-scale transformative projects, be it building renovations, the roll-out of an electric charging infrastructure, or the transition from coal to renewables. Failing to do so will raise the cost of the transition by enabling poor investment decisions, increasing the risk of stranded assets and failing to prepare and enable citizens and businesses to transition to climate-neutrality. The investments made within the framework of the national recovery plans are already the first step in achieving higher targets and will have a lasting impact if (not) steered properly.

Under the EU’s Governance Regulation all 27 Member States have already developed National Energy and Climate Plans (NECPs) for the 2030 timeframe. It is clear that they must now be updated to ensure that they are fully consistent with the 'Fit for 55' package. With draft NECP updates due by 30 June 2023 and final NECP updates due by 30 June 2024, the scheduled finalization of the plans is well aligned with the likely end of negotiations on the 'Fit for 55' package.

But this schedule also leaves only two years before draft NECP updates are due. If Member States are genuinely committed to closing their significant climate action gap, they will need to immediately begin preparing their governments to align all policies and government activities to the EU’s new climate policy architecture.

All posts by Andreas Graf