The German Power Market: State of Affairs in 2019 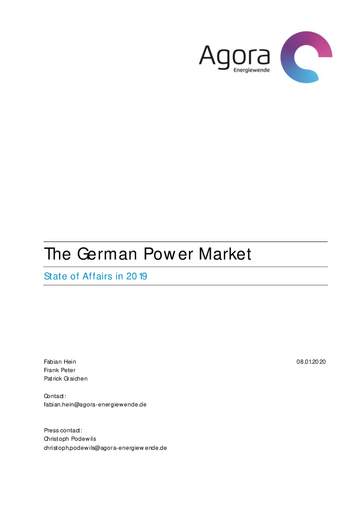 In 2019 surveys have shown that climate protection and the energy transition is the number one concern. Climate change becomes more visible every year. Right at this moment, wildfires have wrought destruction across land the size of Ireland and Switzer-land combined. The FridaysForFuture movement has succeeded in raising public awareness for the scien-tific findings and putting pressure on politics to act. The political response however, has been tepid.

At the same time, the energy transition has moved forward in many fields: Electricity generation from coal has declined substantially leading to a fall of 50 million tonnes in CO2 emissions, a record low. This decline was only exceeded in 2009 during the great financial crisis. Meanwhile, generation from renewables has increased considerably. As a result, wind and solar provided more electricity than lignite and hard coal combined. Unfortunately, such advanced cannot be said of the other sectors. Indeed, emissions in the transport sector even increased in 2019 compared to 2018 levels. Furthermore, the lack of newly installed onshore wind power plants will lead to a decline in their growth rate in the coming years meaning the increase in renewable energy generation will slow down in the future.

This document contains the key findings, the press release, the ten most important take-aways as well as the graphics of the report.