Reducing the cost of financing renewables in Europe 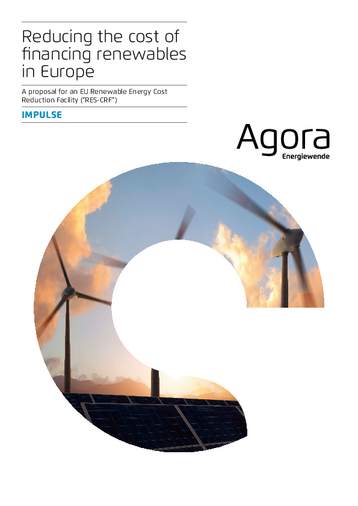 Equalising the costs of capital for investments in renewables throughout the EU could generate significant savings to consumers and taxpayers. It would also allow for a broader sharing of the social, economic and health benefits of renewable energy investments, and would particularly benefit EU Member States with lower than average per capita GDP. The economic case for renewable energy investments will gain importance in the 2020-2030 decade, when the EU will move from nationally binding renewable energy targets to a collectively binding EU-level target that is based on (voluntary) national contributions.

The EU Renewable Energy Cost Reduction Facility developed in this paper would offer member states with high costs of capital the opportunity to develop their renewable energy sources at costs currently enjoyed for renewable investments in Germany or France. If realised, it could be a prime example of how European-level action could add value to national energy policy-making. We offer this idea as input to the ongoing discussion on the post 2020 EU framework for renewable energy