Minimizing the cost of integrating wind and solar power in Japan

Insights for Japanese power system transformation up to 2030 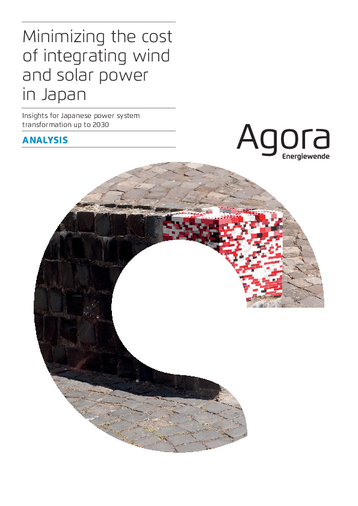 Japan has committed to reduce its greenhouse gas emissions to net zero by 2050. This pledge is a game changer for an industrialized nation such as Japan and a fantastic opportunity to fundamentally change the Japanese energy system, which still relies heavily on fossil fuels.

While in Japan the costs of renewable energy are still high compared to international standards, they are expected to continue their decrease. By 2025, the generation costs of solar PV and wind energy will be close to or even lower than any other sources of electricity generation. With these sharply declining costs of solar PV, wind power and storage units, the transformation towards a low carbon economy in Japan can be massively based on renewables and electrification.

Yet, wind and solar power are different than conventional power. They may induce additional system costs, such as for reinforcing the grid, balancing, and variability.

These system costs of variable renewables – sometimes called “integration costs” – are a hotly debated subject in academic and policymaking circles. With this paper, we shed light on those controversies. We also offer some insights on how to quantify those integration costs in Japan, and more importantly on how to minimize them.

We hope to make a positive contribution to informed debate towards a renewable-based transformation of the Japanese energy system.