Benefits of Energy Efficiency on the German Power Sector (Summary) 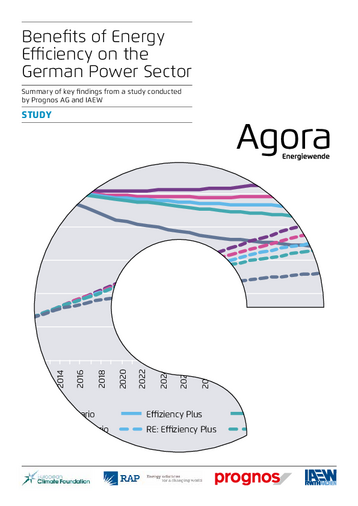 Public debate on the energy transition is dominated by questions surrounding costs. Yet with increased energy efficiency, the energy transition can be implemented much more cost effectively. This is a sorely neglected issue. The value of savings that could be achieved through greater efficiency in the power sector has not been previously quantified. Accordingly, this issue was examined in detail in the study by Agora Energiewende, the European Climate Foundation (ECF), and the Regulatory Assistance Project (RAP). Specifically, the study shows the extent to which the costs of electricity can be reduced through greater energy efficiency in conventional and renewable generation as well as in transmission and distribution grids, with remarkable and quite surprising findings.

The new German government is faced with the task of implementing decisive policies to promote the energy transition. Especially in the case of energy efficiency, there is pressure to take action in order to ensure the achievement of long-term goals: namely, to reduce primary energy consumption 50 percent by 2050 and to reduce power consumption 10 percent by 2020 and 25 percent by 2050. Thus, the study should be understood in part as a plea to appreciate the importance of energy efficiency in the electricity sector, and as a call to grant efficiency a prominent role in the current energy policy debate. With the implementation of the European Energy Efficiency Directive into national law and the National Energy Efficiency Action Plan in Germany’s listed in the coalition agreement, the need for greater attention to this issue is all the more pressing.