A Roadmap for Indonesia’s Power Sector 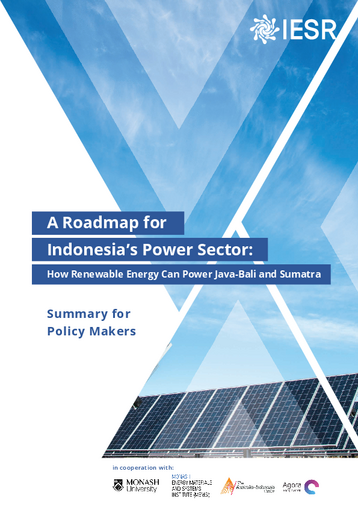 Indonesia is the world’s 4th most populous country on a continuous growth trajectory. To supply the increasing electricity demand, the government is emphasizing the role of fossil, and, in particular coal-fired generation, which is supposed to grow to 65% of total generation. At the same time, it stipulates that by 2025, renewable energy shall make up 23% of generation, up from 8% today. Policy focus is on hydro and geothermal resources, while solar and wind power play only a negligible role.

Globally, the trend is very different: power systems around the world are increasingly being shaped by renewables. Solar and wind – driven by significant technology cost reduction - have been at the forefront of power sector investment for years and will continue to play the decisive role in modernizing and decarbonizing power systems globally.

Against this background, Institute for Essential Services Reform (IESR), together with Monash University Grid Innovation Hub and Agora Energiewende, conducted a model-based powers system analysis, performed with the PLEXOS model which is widely used for power sector analysis. The study focuses on the Java-Bali and Sumatra systems, which is where the majority of the population lives and about 90% of the electricity is produced and consumed. The model assesses both the demand and supply dimensions of the power system.

Looking ten years ahead, we have assessed different pathways for the Indonesia’s power system: what are the impacts of a moderate electricity demand growth on investment and power plant utilisation? What is the impact of adding considerable shares of wind and solar capacity to system cost, and how will the system ensure security of supply?