A Future for Lusatia

A Structural Change Plan for the Lusatia Coal-Mining Region 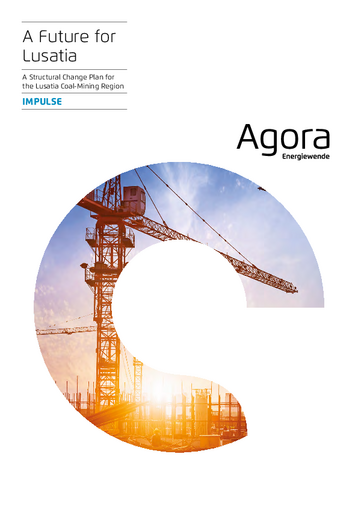 In Germany’s most recent legislative session, the future of coal-fired energy generation was the subject of frequent and vigorous debate. All parties were nonetheless unanimous that the regions most affected by structural change in the lignite coal industry should not be left to fend for themselves.

Agora Energiewende made a key contribution to the debate through the publication of its Eleven Principles for a Consensus on Coal. One of these principles called for the establishment of a structural change fund at the federal level to assist the affected lignite mining regions. The present paper fleshes out this proposal, taking the Lusatia region as an example.

The proposal resulted from intensive discussions with Lusatia-based stakeholders from the spheres of business, academia, politics and civil society. The aim of these discussions was to bring together a wide range of ideas and initiatives from the region, in order to formulate a concrete proposal that would accommodate a broad spectrum of interests.

What is ultimately at stake here is the structural development of the Lusatia region for the 21st century. The key elements of this development include an innovative economy, a prominent place in Germany’s energy transition, up-to-date infrastructure, and a cultural sphere that encourages people to remain in or return to the region. Such a development process of course works best when a region can shape its own future, rather than having decisions made for it elsewhere.

Our proposal seeks to drive forward a debate that has already been underway for some time in the region, and that now urgently needs to bear fruit. We look forward to hearing your responses and suggestions, so that we can reach the best decisions as soon as possible.