What if… there were a nationwide rollout of PV battery systems? 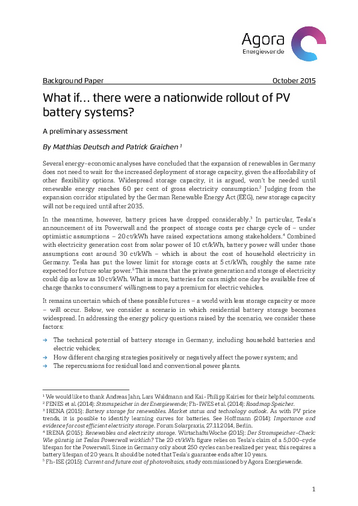 Several energy-economic analyses have concluded that the expansion of renewables in Germany does not need to wait for the increased deployment of storage capacity, given the affordability of other flexibility options. Widespread storage capacity, it is argued, won’t be needed until renewable energy reaches 60 per cent of gross electricity consumption. Judging from the expansion corridor stipulated by the German Renewable Energy Act (EEG), new storage capacity will not be required until after 2035.

In the meantime, however, battery prices have dropped considerably. In particular, Tesla’s announcement of its Powerwall and the prospect of storage costs per charge cycle of – under optimistic assumptions – 20 ct/kWh have raised expectations among stakeholders. Combined with electricity generation cost from solar power of 10 ct/kWh, battery power will under those assumptions cost around 30 ct/kWh – which is about the cost of household electricity in Germany. Tesla has put the lower limit for storage costs at 5 ct/kWh, roughly the same rate expected for future solar power. This means that the private generation and storage of electricity could dip as low as 10 ct/kWh. What is more, batteries for cars might one day be available free of charge thanks to consumers’ willingness to pay a premium for electric vehicles.

It remains uncertain which of these possible futures – a world with less storage capacity or more – will occur. Below, we consider a scenario in which residential battery storage becomes widespread. In addressing the energy policy questions raised by the scenario, we consider these factors: