Learning from the Yellow Vests Protests 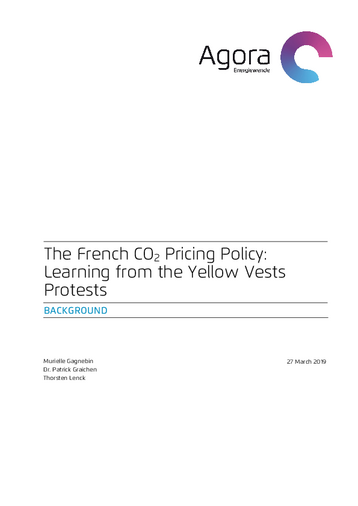 On the 17th of November 2018, over 250,000 demonstrators descended upon more than 2,000 locations throughout France in what was seen as an unprecedented challenge to the French government. This coalition of diverse and politically independent individuals commonly referred to as Yellow Vests was born in opposition to the increase in petrol and diesel prices resulting from the planned increase in CO2 pricing. Today this movement’s demands have evolved to encompass wider questions of social justice and greater consideration for the interests of lower income groups in rural areas.

What mistakes did the French government commit when it comes to CO2 pricing? After all, CO2 taxation is recognised as one of the most important and efficient instruments for climate protection and is recommended to governments by economists of all kinds. But the example of France shows that the redistribution effects associated with CO2 taxation must be taken into account from the outset. In this background paper, we explore the reasons that led to the situation in France and the lessons that can be drawn from it.