The 'Energiewende' and the 'transition énergétique' by 2030

Focus on the electricity sector. Co-dependent impacts of German and French choices on nuclear and coal in the context of renewable energy development. 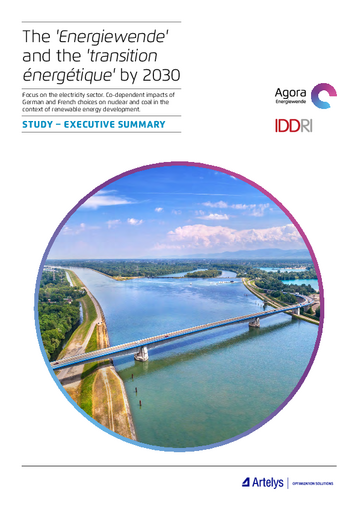 In line with the Paris Climate Agreement, France and Germany are aiming for a deep decarbonisation of their economies by 2050, which will require major sectoral changes. In the electricity sector, the two countries have different starting points, but their current long-term strategies contain many similar orientations: increasing energy production from renewable sources, improving energy efficiency, and increasing electrification of heat and transport.

The expected growth of energy production from wind turbines and solar photovoltaic, supported by the recent fall in the costs of these technologies, will lead to a profound transformation of the electricity systems in both countries. It is becoming necessary to adapt such systems to be able to integrate these variable energy sources. In this context, the question of the adjustment of today’s dominant conventional power generation fleets, nuclear in France and coal in Germany, arises on both sides of the Rhine.

In 2030, the choices made by France and Germany will have an influence far beyond their borders on the electricity flows and the formation of electricity prices on the market. These choices will therefore have a major impact on the achievement of the energy-climate objectives in Europe, and on the realization of the Energy Union.

This study highlights the interdependence of national policy choices beyond borders. We hope that it will contribute towards facilitating a transparent and open dialogue between the actors of the two countries, encourage the development of a shared understanding of the energy transition, and help reach the necessary compromises for a deeper integration of the European energy system.