Renewables versus fossil fuels – comparing the costs of electricity systems 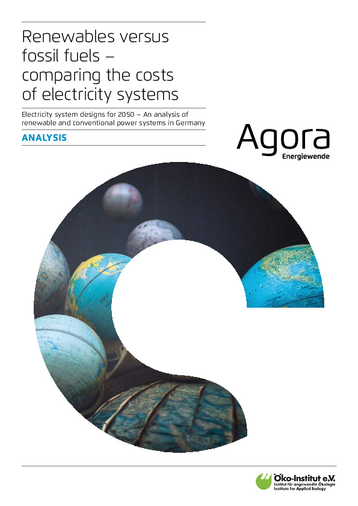 The year 2050 is associated with many hopes and fears. By this year, Germany aims to complete its
transition to a power system based almost completely on renewables. But will such a system be financially feasible?

To answer this question, we asked experts at the Öko-Institut to study various options for the future design of the power system, and to compare their costs.

The study considers four different scenarios for the power system in 2050: two scenarios based on fossil fuels (one on coal, and one on natural gas), and two scenarios for renewables-based systems that differ in their deployment of storage technology. In this “2x2” comparison, the authors assess the total system costs and CO₂ emissions produced by alternative configurations of the power system.

A key finding of the study is that the relative advantages associated with each scenario heavily depend on future fuel and CO₂ prices. And while it is difficult to estimate the prices that will prevail in 2050, the thought experiment conducted in this study does make one thing clear: abandoning the energy transition does not mean that energy costs vanish – it just leads to different costs. And these might just turn out to be higher than expected.