Costs and Benefits of Options to Increase System Flexibility 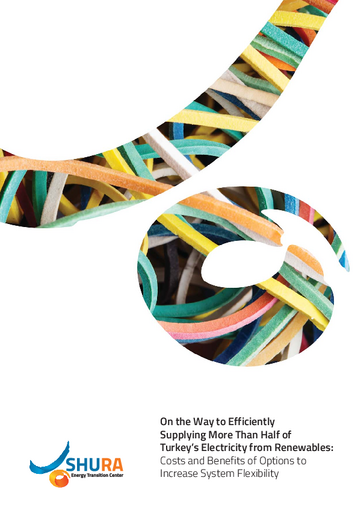 The use of renewable energy resources, primarily wind and solar, is expected to grow significantly within Turkey’s power system. There has been rapid growth in the installed renewable electricity generation capacity in recent years and Turkey saw a record year in 2017. As deployment of renewable electricity generation technologies is on the eve of acceleration, there is a need to better understand how the rising share of wind and solar will affect Turkey’s power system.

In previous analysis, SHURA showed that tripling the planned wind and solar capacity to 60 GW by 2026 (supplying 30% of Turkey’s total electricity demand) is possible, but integrating this capacity would require a more flexible power system.

In this analysis, the costs and benefits of increasing system flexibility are estimated assessing the following options: energy storage enabled by (i) 600 megawatts (MW) of distributed battery storage (in total 11 battery storage technologies have been investigated mainly from electro-chemical and electro-mechanical types), (ii) 1.4 GW of pumped-hydro storage, (iii) demand response mechanisms that can shift load by 5% at any given time and (iv) retrofitting old coal-fired power plants to standard levels prevalent in OECD countries.

Key outcomes of the cost-benefit analysis include: