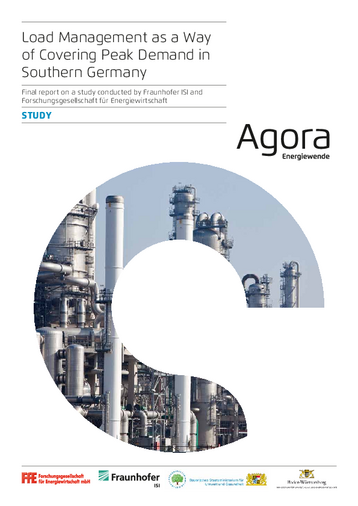 All of Germany’s nuclear power stations are to be decommissioned by 2022. The majority of the energy they generated will be compensated for by means of wind farms and solar arrays. On days when the demand for electricity is high, there could be shortages in the electricity supply overnight and at downtimes in Germany’s southern states in particular, if the necessary capacities are not put in place in good time. This is because the majority of Germany’s nuclear power stations will be disconnected from the grid in southern Germany and it is open to question as to whether the transmission systems in other regions can be expanded in time.

There will be very few hours and days in the year when peak demand coincides with a lack of electricity generated by means of wind energy and solar power. Building highly flexible power plants to bridge this gap for just a few hours a year could therefore be more expensive than shifting the demand for electricity in time. From an economic perspective, it may be wiser to voluntarily involve the electricity consumers in solving the problem. In southern Germany alone, the output of several large power plants could be saved if active consumption management were implemented. What’s more, such measures could be implemented in a relatively short space of time – and at a cost that would likely be below the cost of building gas-powered peak load power plants. This is brought to bear in this study, which was produced with the assistance of numerous companies in Bavaria and Baden-Württemberg and also the two states’ governments.

However, active consumption management can only become a part of the electricity system if the consumers – in particular businesses and industrial enterprises – benefit from temporarily reducing their electricity consumption when asked to do so. And for this to be the case, the current electricity market needs to be changed and expanded. There are already plenty of examples of a time shift in the consumption of electricity being compensated financially, as is the case in the world’s biggest electricity market, the USA. If Germany were to take a leaf out of the USA’s book, it could not only maintain its high level of security of supply, but could also lower the costs caused by its energy transition.