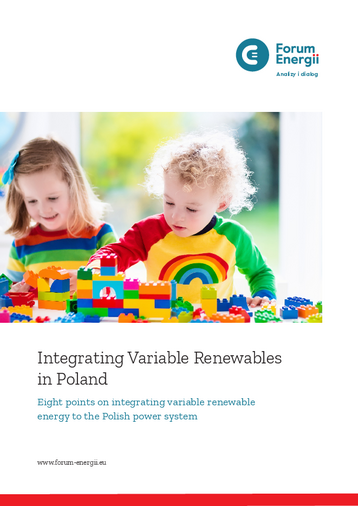 The Polish energy mix is changing. While absolute figures still show a rather small share of variable renewables in the generation mix, these will play a growing role in the future. The study of Forum Energii presents eight main areas of action that facilitate the further integration of the renewables in the specific context of a changing Polish power system.

Wind and solar power have seen tremendous technological improvement and cost declines in recent years. This is reflected in the outcome of auctions worldwide, where, in many regions, these sources of electricity have reached prices making them cost-competitive with conventional generation. Costs for variable renewables are projected to decrease even further in the future, making them game changers in power sectors around the globe. These developments are likely to lead to the arrival of higher shares of variable renewables in Poland as well, where additional arguments in their favour may prompt their deployment.

The report "Integrating Variable Renewables in Poland. Eight points on integrating variable renewable energy to the Polish power system" aims at presenting options that are available to facilitate the integration of the growing shares of variable renewables in the specific context of changes in the Polish power system. Rather than formulating final recommendations, its aim is to provide the ground for a fact-based debate, structured around eight key points: