Increasing the Share of Renewables in Turkey’s Power System

Options for Transmission Expansion and Flexibility 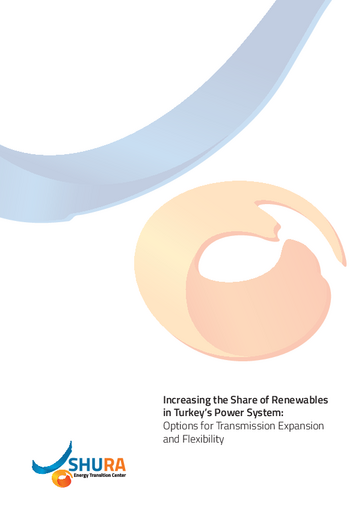 The use of renewable energy resources, primarily wind and solar, is expected to grow significantly within Turkey’s power system. There has been rapid growth in the installed renewable electricity generation capacity in recent years and Turkey saw a record year in 2017. As deployment of renewable electricity generation technologies is on the eve of acceleration, there is a need to better understand how the rising share of wind and solar will affect Turkey’s power system. This evidence-based analysis highlights priority areas and informs energy planners, system operators, decision-makers and key market players on the consequences of higher shares of renewables and what they would mean for transmission investment and integration strategies in Turkey.

The study, carried out by SHURA Energy Transition Center with strong support of Agora Energiewende is a first of its kind for Turkey. It is based on detailed quantitative modeling of the Turkish transmission system, which was performed by Turkish modeling team EPRA Elektrik Enerji in collaboration with IAEW Aachen. The outcome helps inform discussions about Turkey’s transition to a low-carbon electricity system, by proposing sound strategies on how the current transmission system can integrate higher shares of renewables.

The analysis shows that Turkey can generate 20% of its total electricity from wind and solar by 2026 without negatively impacting transmission system operation and planning. The study also presents a pathway for going to shares of 30% for wind and solar, and thus producing half of Turkey’s demand from Renewables (including hydro, geothermal and biofuels). A wider distribution of solar and wind capacity across the country – based on demand, substation capacity, wind speed and irradiation – produces remarkable benefits for integration. Grid integration of such high shares of Renewables will, in addition, be facilitated by providing flexibility to the system through some addition of pumped hydro and battery storage, more flexible thermal power plants and initial steps of demand response mechanisms.