Increased Integration of the Nordic and German Electricity Systems (Summary) 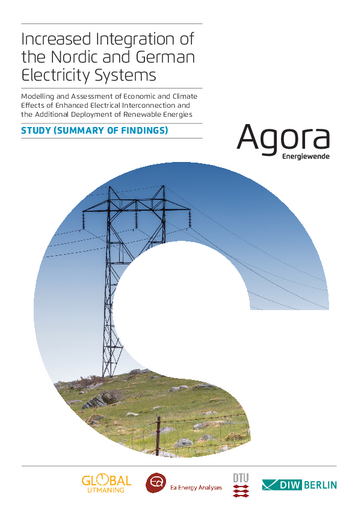 Increased integration of power systems is one of the prerequisites for the completion of the EU internal energy market – and with it the achievement of higher cross-border transmission capacities between European countries. The Nordic countries have vast potentials in renewable energy, such as wind energy, together with already existing hydropower reservoirs.

As part of the Energiewende, the German electricity system is undergoing the transition toward a high share of renewable energy – wind and solar photovoltaics in particular. Increased integration of the Nordic and German electricity markets will bring mutual benefits for power systems, greenhouse gas emissions mitigation and the wider economy. At the same time, increased integration affects stakeholders such as power producers and consumers in different ways in different countries. These effects are important to consider when increasing public acceptance for new (cross-border) transmission lines.

Agora Energiewende and the Swedish think tank Global Utmaning have put these issues to a consortium of three leading European research institutes. The aim of the resulting study was to examine the impact of increased integration between Nordic countries and Germany with a variety of renewable electricity shares. The study is meant to foster dialogue and discussions across countries and stakeholders, and encourage further research. The findings, as well as the accompanying technical reports, have been published on Agora Energiewende’s website.