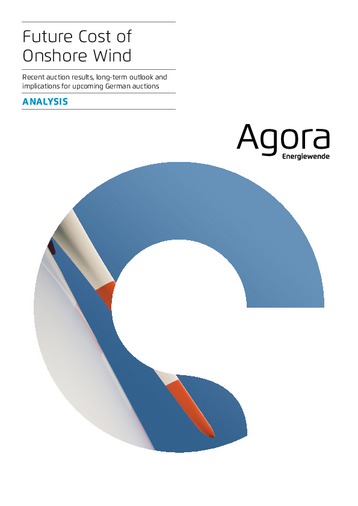 The costs for electricity from renewable generation have been falling significantly in recent years, and record low bids at auctions around the world have grasped the attention of the public. Solar photovoltaics and offshore wind auctions, in particular, have attracted a lot of interest. The results for onshore wind, however, are just as impressive.

The future cost development of onshore wind is of great relevance, since it is a key pillar of the energy system transformation in many parts of the world. However, the estimated long-term cost reductions vary significantly, as different studies value the cost drivers of wind differently. In Germany, the opaque and complex cost structure of onshore wind is the root of much controversy. International auction results with winning bids of less than half of the typical German pay rate left people questioning the costs of domestic wind power. However this discussion often fails to account adequately for differences in the quality of wind resources. In light of the first, German onshore wind auctions, we aim to contribute to the ongoing discussion by providing the necessary context for international auction results, a general outlook on the future cost of onshore wind, and by illustrating the existing potential and hindrances for cost reductions in the German market.