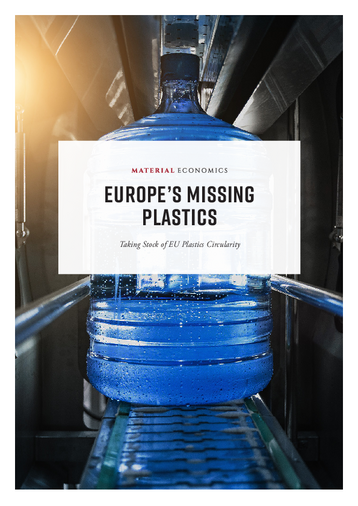 New estimates of European plastic waste volumes: the EU generates twice as much plastics waste per year than assumed by policy-makers and industry.

The short study “Europe’s missing plastics – taking stock of plastics circularity”  is a timely deep dive, authored by Material Economics, on the shortcomings of the EU’s plastic waste and recycling statistics. This topic has been underrated despite its significance. Current EU statistics are shown to fall short of tracking the entire amount of plastic waste generated each year, leading to inaccurate and under-evaluated targets for reducing, collecting and recycling plastic waste.

The study finds that Europe generates about 45 million tonnes of plastics waste per year, or 50% more than the 25–30 million tonnes assumed by policy-makers and industry.

A key implication is that only 15% of end-of-life plastics generated each year are recycled into new materials, instead of the 35% currently estimated. The rest are landfilled or burnt to produce heat and power. This, in turn, has major implications for greenhouse gas (GHG) emissions and reaching  EU climate targets.

The study finds that unless recycling is greatly improved, annual emissions from plastics will exceed 125 million tonnes by 2050, more than is emitted by all EU cement plants today.

In order for plastics to go circular and climate neutral, a systemic change in the value chains and a major policy shift are needed. The study gives an overview of interventions that have been proposed in Europe and globally .

The short paper “Europe’s missing plastics – taking stock of plastics circularity” provides the basis for the plastic waste data used in the Agora Industry report “Mobilising the circular economy for energy-intensive materials: How Europe can accelerate its transition to fossil-free, energy-efficient and independent industrial production”, done with the support of Material Economics.