Assessing the Winter Package in Light of the Energy Union Objectives 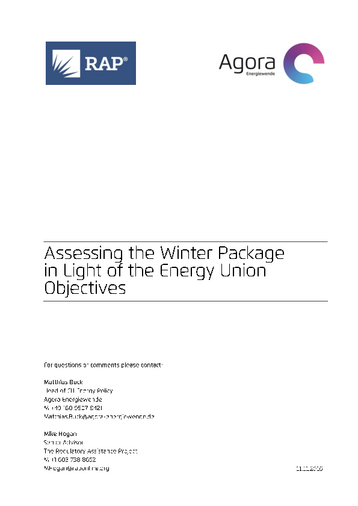 On 30 November 2016, the European Commission adopted a complex set of legislative proposals to steer the EU’s climate and energy policy for the next decade and to deliver the EU targets for 2030 on climate and energy. Important elements of the package include legislation on the design and functioning of EU power markets, on energy efficiency, on renewable energies, and on EU climate and energy governance. These proposals, which will now be discussed by the European Parliament and by Member States in the Council of the European Union, add on to already ongoing legislative discussions on further reforms of the EU emissions trading system and on effort-sharing of Member States in reducing greenhouse gas emissions outside the EU ETS.

The paper “Assessing the Winter Package in Light of the Energy Union objectives” was developed by Agora and RAP to inform the political level discussion in the EU institutions on the package well before its adoption. The paper cuts through the details and complexities of the legislative and policy initiatives, highlighting critically important elements for a cost-effective European energy transition and pitfalls that should be avoided.