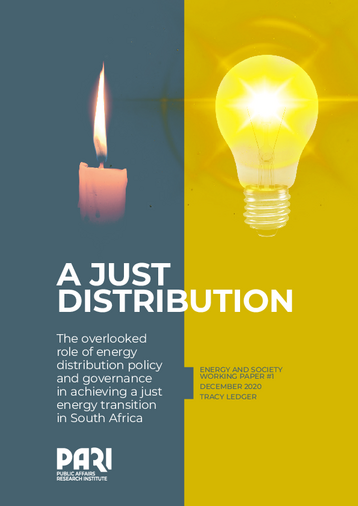 South Africa’s energy system, along with many others around the world, currently faces the prospect of significant change – a transition, and in theory, a ‘just transition’. There are multiple definitions of exactly what constitutes a just energy transition, but most encompass both the necessity of transitioning to a low-carbon system, and doing so in a manner that is just. There is general agreement about the low-carbon side of this goal (although there are some differences in respect of what constitutes ‘low’), but less so in respect of how ‘just’ is to be defined and measured.

Why is this research important? Firstly, the dominant narrative effectively determines and sets limits to the just energy transition agenda – what is on the table for discussion and for the attention of policymakers. By implication, the factors that are not currently part of this narrative are effectively not on the just transition agenda. They therefore do not (and will not) receive the requisite attention from either policy makers or civil society. In our assessment, these overlooked factors are significant in respect of their impact on poverty and inequality, and are thus critical to building a more equitable and socially just energy system. The current opportunity for radical restructuring of the energy system is unlikely to be repeated: if we do not include a broader social justice agenda in the energy transformation agenda now, we may never have as good an opportunity again. Instead, we are likely to further entrench existing patterns of poverty and inequality driven by the energy system, further undermining the national developmental agenda.

Secondly, the mainstream definition of what constitutes a legitimate just transition agenda also determines who is considered a legitimate stakeholder (and thus entitled to contribute to solution creation) and who is not. A limited agenda effectively excludes from the national debate those who actually may have a significant vested interest in the future form and operation of the energy system.