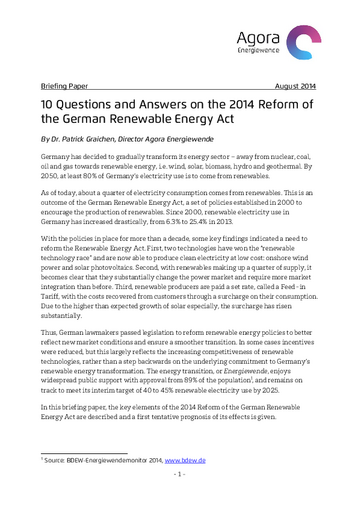 Germany has decided to gradually transform its energy sector – away from nuclear, coal, oil and gas towards renewable energy, i.e. wind, solar, biomass, hydro and geothermal. By 2050, at least 80% of Germany’s electricity use is to come from renewables. As of today, about a quarter of electricity consumption comes from renewables. This is an outcome of the German Renewable Energy Act, a set of policies established in 2000 to encourage the production of renewables.

With the policies in place for more than a decade, some key findings indicated a need to reform the Renewable Energy Act. First, two technologies have won the “renewable technology race” and are now able to produce clean electricity at low cost: onshore wind power and solar photovoltaics. Second, with renewables making up a quarter of supply, it becomes clear that they substantially change the power market and require more market integration than before. Third, renewable producers are paid a set rate, called a Feed-in-Tariff, with the costs recovered from customers through a surcharge on their consumption. Due to the higher than expected growth of solar especially, the surcharge has risen substantially.

Now that the program has seen more than a decade of use, German lawmakers have initiated reforms to better reflect these market conditions and otherwise improve its functioning. In some cases the reform reduces renewable energy incentives, but this does not represent a walk backwards on the underlying commitment to Germany’s renewable energy transformation – the law includes interim targets of 40 to 45% renewable electricity use by 2025 (and 55 to 60% by 2035).

In this briefing paper, the key elements of the 2014 Reform of the German Renewable Energy Act are summarised.