The German Coal Compromise and its Significance for the Energy Industry

How will the proposed roadmap for phasing out coal power impact the energy sector, electricity prices, and the achievement of emissions targets? Agora Energiewende has assessed the recommendations of the German Coal Commission. 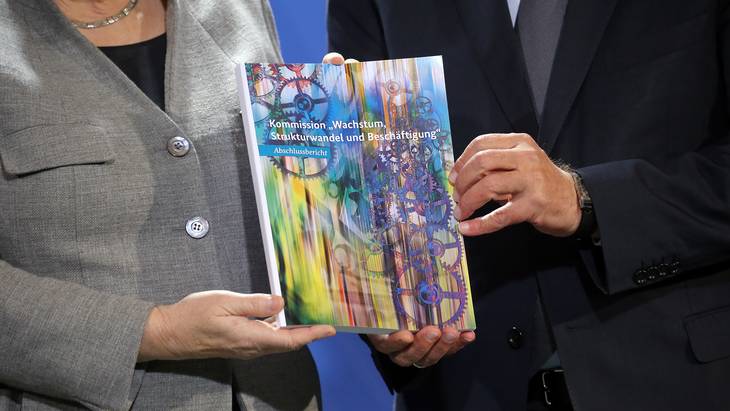 According to the key findings of an empirical analysis performed on behalf of Agora Energiewende, the phase-out of coal-fired generation in conjunction with the expansion of renewables in Germany would have very little impact on electricity prices: In 2030, one kilowatt-hour of electricity would cost just one percent more than today, given the expansion of renewables to 65 percent of the power mix, in combination with a two-thirds reduction in coal generation, as foreseen by the German Coal Commission. The coal compromise, which this commission agreed to in early 2019, will also ensure that electricity prices remain competitive for industrial firms that consume large quantities of electricity.

The analysis compares two scenarios: one in which coal-fired generation is reduced in line with the recommendations of the Coal Commission, and a “business-as-usual” scenario with no coal phase-out or additional expansion of renewables. The study’s calculations indicate that household customers would pay in real terms approximately 0.4 euro cents per kilowatt-hour more in 2030 than they do today. Grid usage fees – a surcharge on the electricity price to pay for the expansion and modernisation of the electricity grid – would continue to make up the largest portion of electricity costs. Energy-intensive industries even stand to benefit from the Coal Compromise because by 2030 the robust expansion of renewables will have reduced the wholesale price of electricity by approximately 0.5 euro cents per kilowatt-hour relative to the business-as-usual scenario. “The rapid expansion of renewables,” Patrick Graichen, the director of Agora Energiewende, concludes, “would thus protect energy-intensive industries from high electricity prices.” To benefit from more green generation, however, these industries would need to remain exempt from the EEG-Umlage, a levy used to finance the expansion of renewables.

The Agora study also conducted a detailed analysis of the 300-page final report released by the Coal Commission, offering a synopsis and assessment of its findings. “While the Coal Compromise identifies 2038 as the year in which the phase-out of coal power will be complete, the actual exit could come earlier thanks to a review that will recur every three years and allow additional measures to be implemented,” Graichen says. “As a supplementary policy measure to help coal regions adapt economically, the Commission also recommends 2 billion euros in federal spending for structural change, including measures to ensure no coal industry employee is left high and dry. This makes the Coal Compromise particularly valuable. The government should implement its recommendations in full, without amendment.”

According to the phase-out roadmap proposed by the Commission, Germany will still have 17 gigawatts of coal-fired capacity in 2030, versus 41 gigawatts today. This decline will lower the annual carbon emissions of the power sector by 60 percent, from 319 million tonnes to 182 million tonnes, thus enabling Germany to meet its 2030 carbon abatement target for the power sector – but only if the Commission’s recommendations become law now.

In January 2019, the Coal Commission released its final report, which set forth a comprehensive package of recommendations for phasing out coal generation. Agora Energiewende has taken a closer look at the Commission’s recommendations, analysing how they would impact the energy industry. The English version of the analysis, titled “The German Coal Commission: A Roadmap for a Just Transition from Coal to Renewables”, is available for download below. Aurora Energy Research conducted the empirical modeling for the study.