In 2020, wind, solar, hydropower and biomass supplied 38 percent of the EU's electricity, according to an analysis by Ember and Agora Energiewende. Germany has the third highest share of renewables in the European Union. 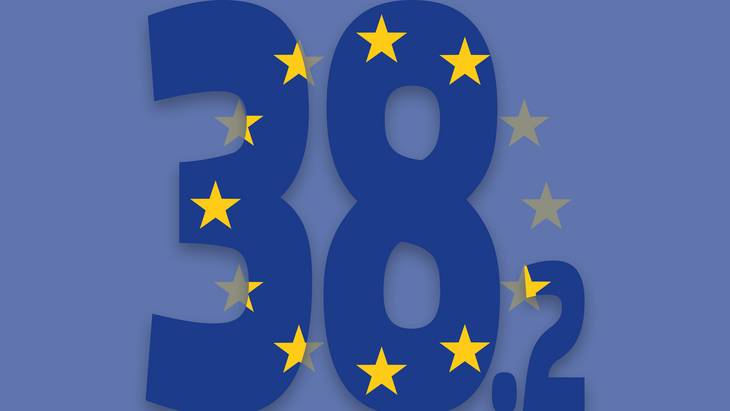 Europe recorded its greenest electricity year ever in 2020. For the first time, more electricity was generated from renewables than from fossil fuels. Renewables accounted for 38 percent of Europe's electricity mix in 2020, compared with only 37 percent for fossil fuels, according to a joint analysis by Agora Energiewende and the British think tank Ember.

The change was driven by the rapid growth of wind and solar power, which has almost doubled since 2015. By 2020, one-fifth of EU electricity came from wind and solar power plants. The highest shares were recorded in Denmark (61 percent), Ireland (35 percent), Germany (33 percent) and Spain (29 percent).

“It is significant that Europe has reached this landmark moment at the start of a decade of global climate action” says Dave Jones, Ember’s senior electricity analyst and the lead author of the report. “Rapid growth in wind and solar has forced coal into decline but this is just the beginning. Europe is relying on wind and solar to ensure not only coal is phased out by 2030, but also to phase out gas generation, replace closing nuclear power plants, and to meet rising electricity demand from electric cars, heat pumps and electrolysers.”

European electricity demand fell four percent in 2020, reaching a low in April during the first Covid-19 wave. Renewables growth was robust despite the pandemic. Further declines in fossil fuels were held back by increases in electricity demand later in the year and below-average nuclear generation.

The study also found that Europe's electricity was 29 percent less carbon-intensive in 2020 than in 2015, with the carbon intensity of European electricity generation reaching a record low of 226 grams of CO2 per kilowatt-hour in 2020.

"The economic recovery after the pandemic must not be allowed to slow down climate protection," says Dr. Patrick Graichen, director of Agora Energiewende. "We therefore need strong climate policies - such as the Green Deal - to ensure steady progress."

At 51 terawatt-hours in 2020, the growth in electricity from wind and solar energy is above the average growth rate of the past ten years, which came in at 38 terawatt-hours. "However, to achieve the 100 terawatt-hours of annual additions required for climate neutrality, a doubling of the 2020 level is necessary," Graichen explains. The current National Energy and Climate Plans (NECP) of the EU member states would only increase this figure to 75 terawatt-hours per year by 2030.

The study "The European Power Sector in 2020" is available for free download at www.ember-climate.org and www.agora-energiewende.de. It contains up-to-date data on the EU-27 and 19 individual countries.