Records with renewables, but once again no progress on CO2 emissions – 2017 was a year of mixed success for the energy transition 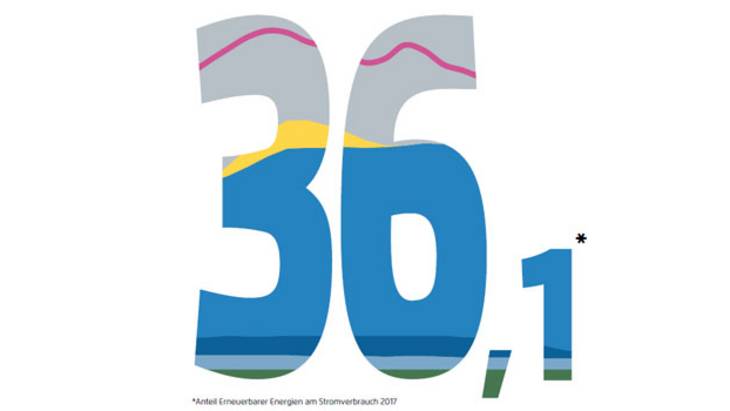 Renewables were at a record high in 2017: 36.1 per cent of the electricity was supplied by wind power, biomass, solar and hydroelectric power plants. This is 3.8 per cent points more than in 2016 and thus the highest ever increase. Wind energy contributed the most to this, which was due to both its ongoing expansion and the good wind conditions in 2017. For the first time, more electricity was produced from wind than from coal and nuclear power. These fell to the lowest level since 1990. This is shown by "The energy transition in the electricity sector: State of affairs 2017" study, which Agora Energiewende has now presented.

The energy transition is therefore making good progress in terms of increasing renewables and phasing out nuclear energy. However, greenhouse gas emissions recorded disappointing levels in 2017: emissions of climate-damaging CO2 stagnated at the same level for the third year in a row instead of declining as envisioned. Whilst emissions in the electricity sector declined slightly in 2017 as a result of the reduction in coal-fired power production, CO2 emissions increased in the transport, building and industrial sectors owing to greater oil and natural gas consumption. "The current trend is that by 2020 Germany will cut its emissions by only 30 per cent compared with 1990 levels, instead of 40 per cent as planned," says Dr Patrick Graichen, Director of Agora Energiewende.

The main reason for this is the increasing energy consumption: in the past year, 0.8 per cent more energy was consumed than in 2016 – electricity, diesel and natural gas increased. This makes it almost impossible to achieve the energy efficiency targets for 2020 set by the German federal government in its Energy Concept 2010 (20 per cent less primary energy and 10 per cent less electricity consumption than in 2008). "Energy efficiency advances are too little to offset or even overcompensate for additional consumption arising from economic and population growth," says Graichen.

Electricity sales abroad have also risen again: more than 60 terawatt hours of electricity were exported on balance in 2017, which corresponds to around 10 per cent of the electricity consumed in Germany. The reason: Because Germany has the second lowest market electricity prices in Europe, it is worthwhile for Germany's coal and gas power plant operators to sell their electricity to their neighbours. The overall revenue for this amounted to 1.4 billion euros – the hours with negative electricity prices, which often attract particular attention, are on the other hand negligible in the overall balance sheet.

The wholesale prices for electricity in 2017 rose slightly compared with 2016 due to higher import prices for coal and natural gas. Household electricity is therefore expected to cost 1.4 per cent more on average in 2018, which means that it will cost for first time more than 30 cents per kilowatt hour. In contrast, the 2017 renewable energy auctions have shown just how cheap wind and solar power have now become: the guaranteed reimbursement for a kilowatt hour dropped to less than 5 cents for solar power, to less than 4 cent for onshore wind and to less than 2 cents for offshore wind. This means that electricity from high-performance new renewable energy systems is now consistently cheaper than electricity from new conventional power plants.

"With renewables we made good progress in 2017 in terms of their expansion and cost reduction. However, when it comes to protecting the climate, Germany as a pioneering country is on the brink of failure. There are three reasons for this: firstly, emissions in the transport sector, especially freight transport, have been increasing for years; secondly, industry has not been increasing its efficiency at the same rate as it has been increasing production; and thirdly, the most harmful source of CO2, lignite, remains at a consistently high level. If the new government does not react quickly, Germany will massively miss its greenhouse gas reduction targets for 2020 and also for 2030," warns Agora Director Patrick Graichen.

"The energy transition in the electricity sector: State of affairs 2017" ("Die Energiewende im Stromsektor: Stand der Dinge 2017") study, can below be downloaded free of charge. The approximately 60-page German-language publication describes the main trends in ten sections with numerous illustrations. Both an English summary and an English slide deck are available. The study is based on currently available data from a variety of public sources.