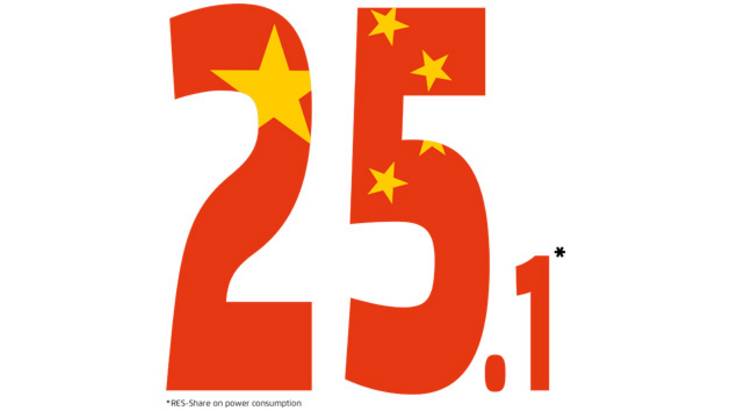 China’s power system is becoming cleaner and increasingly efficient even as overall electricity production continues to rise. In 2016, the total share of renewables amounted to 25%, up from 17% in 2010. During the same period, the percentage of coal-fired generation in the power mix dropped 11 points to 65%. These are the main findings of a report released by Agora Energiewende in conjunction with the China National Renewable Energy Centre (CNREC).

The report, titled “Energy Transition in the Power Sector in China,” found that energy use rose 41% since 2010, from 4,200 to 5,920 terawatt hours – roughly 10 times what Germany now produces each year – while gross domestic product jumped almost 90%. Together, these developments led to a 17% improvement in the economy’s energy efficiency.

During the same time span, China established wind and solar as important sources of renewable energy alongside hydropower. In 2016, wind turbines contributed 241 terawatt hours to China’s power consumption. Solar photovoltaic systems supplied 66 terawatt hours, with most of the growth occurring in the past three years. Last year alone, China installed 34 gigawatts of additional solar capacity, almost as much as Germany’s total, and the 13th Five-Year Plan calls for a doubling of wind and solar generation by 2020. However, the main pillar among China’s renewables will remain hydropower, which in 2016 produced 1,183 terawatt hours, though only a small amount of added capacity is planned through 2020.

As the share of renewable energy has grown, full-load hours at China’s coal-fired power plants have fallen, dropping some 20% since 2010. This, in turn, has kept CO2 emissions stable for the past three years. By 2020, China plans to shut down 20 gigawatts’ worth of coal plants. Since these will needed to be replaced by more efficient stations, the CO2 emissions could continue levelling off.

“Though China is still the world’s largest producer of greenhouse gases, there’s hope to be found in the fact that the importance of coal-fired generation has already begun to wane and further improvements are planned,” says Markus Steigenberger, the director of the international programme at Agora Energiewende. “Moreover, China has since become the most important investor in wind turbines and photovoltaic installations. And the country has made great efforts to better integrate renewables into the power system. As such, it can follow Germany in being a role-model for other nations that have heavily relied on fossil fuels in the past.”