Share of wind and solar energy as well as biomass and hydropower rose to 32.3 percent / Agora Energiewende and Sandbag present annual evaluation of EU electricity system for 2018 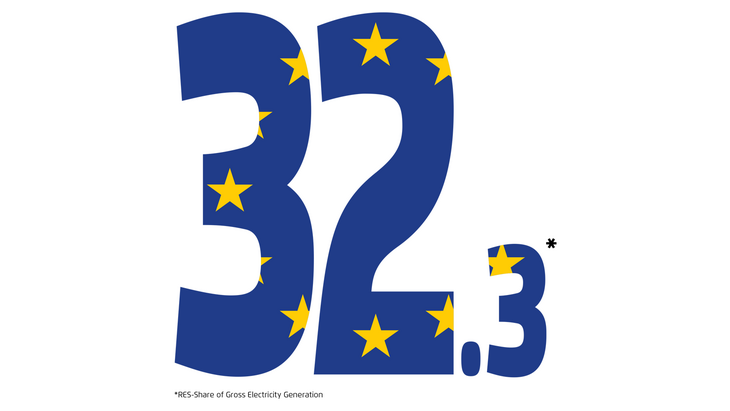 The share of electricity from renewable sources in the European Union grew again in 2018 and reached 32.3 percent. This corresponds to an increase of more than two percent points compared to the previous year. New wind, solar and biomass plants displaced hard coal – especially in Germany, UK and France - and an increase back to normal levels of hydro generation cut gas generation. Consequently, EU total coal generation fell by 6 percent in 2018 and was 30 percent below 2012’s generation – but the difference between hard coal and lignite is stark.

These are some of the key findings from the 2018 review of the European Union's electricity system, which the think tanks Agora Energiewende (Germany) and Sandbag (UK) have now presented.

Lignite generation fell only by 3 percent in 2018. Germany accounted for almost half of the EU’s lignite generation, which has been set a date to be phased out by 2038. The other half is in six countries where discussions on phase-out have yet to bear fruit: Poland, Czech Republic, Bulgaria, Greece, Romania and Slovenia. The low growth of renewables in these countries is one key reason for this.

“Europe is proving that replacing coal generation with renewables is the fastest way to cut emissions. In just six years, between 2012 and 2018, Europe’s annual CO2 emissions from coal power plants have fallen by 250 million tonnes with no increase in emissions from power generation with natural gas. But it’s a tale of two coals: most of the fall is from hard coal, and not dirtier lignite. Europe’s phase-out of hard coal is gathering pace, but Europe’s phase-out of lignite is only just beginning," says Dave Jones, author of the study and analyst at Sandbag.

Solar on the rise

In 2018, solar energy accounted for only 4 percent of the EU electricity mix, although it was a little higher in some countries: in Italy (just under 9 percent), Greece (just under 8 percent) and Germany (around 7 percent). But solar additions in the EU increased by more than 60 percent to almost 10 gigawatts in 2018 and could triple to 30 gigawatts by 2022, as module prices fell by 29 percent in 2018. In northern Europe, solar generation peaked to record levels due to the very hot and dry summer in 2018. This helped to fill generation gaps as hydro, hard coal, wind and nuclear generation all stumbled. In six EU countries (Ireland, Finland, Poland, Sweden, Croatia and Hungary), the share of solar power remained below one percent.

Despite the growth in photovoltaics of 10 gigawatts, the EU only has a share of less than ten percent of the solar world market, which last year comprised 109 gigawatts.

"The EU so far largely missed the opportunity to profit from the very favourable solar module prices, which mean that solar power from new plants is now often cheaper than electricity from conventional power plants," says Matthias Buck, Head of European Energy Policy at Agora Energiewende. "On the positive side, however, three countries - Spain, France and Italy - are now aiming for solar outputs of 45 gigawatts and more. This makes the potential very clear and will set an example."

The analysis by Sandbag and Agora Energiewende also shows that renewable growth must step up substantially. The EU’s 2030 goal of covering 32 percent of energy demand with renewable energy, requires the share of renewables in the electricity sector to rise to 57 percent by 2030, at the same electricity consumption itself is increasing. The reason: Large parts of the greening of transport and buildings will be realized through electric vehicles and electric heating, powered by wind and solar. This will be favoured by recent shifts of the operational costs of conventional power plants. In 2018, wind and solar power were for the first time comparable to existing coal and gas generation costs. Coal price rose by 15 percent, gas prices rose by 30 percent, and the CO₂ price rose by 170 percent in 2018. Consequently, wholesale electricity prices rose to 45–60 Euros per Megawatt hour through Europe. This is the level at which the latest wind and solar auctions cleared in Germany. “This means that the cost of renewable electricity is now similar or even below wholesale electricity prices in many countries," says Buck.

The study "The European Power Sector in 2018" is available further below and on www.sandbag.org.uk. It comprises 44 pages and contains numerous graphs and tables.

The graphs are available here for free use in various file formats.