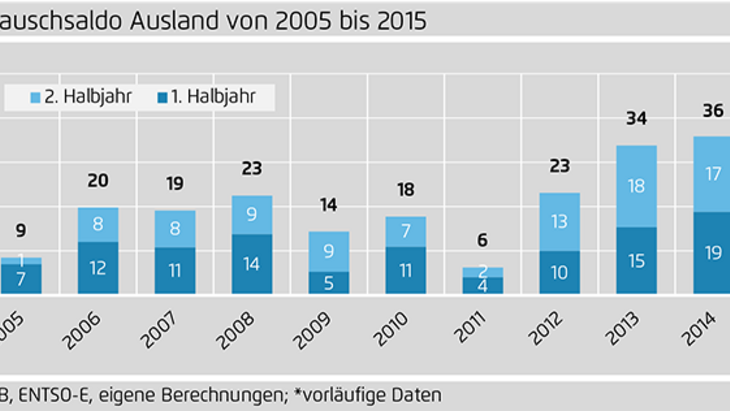 Demand for German power abroad was driven by continued falling prices on the power exchange, which are among the lowest in Europe. The average market price in the first six months was 3.02 cents per kilowatt hour (kWh) (H1 2014: 3.24 cents/kWh, H1 2013: 3.76 cent/kWh).  Prices fell due to the considerably larger supply of electricity from renewable energies. Its share in German power consumption grew as wind power production increased to a new record of 31.4 percent (from 81 to 92 TWh). In contrast, electricity generation from lignite and hard-coal power plants fell to 128 TWh compared to 135 TWh in the same period last year. Production from nuclear power plants (48 TWh) and gas power plants (27 TWh) remained steady near the previous year's level.

"Especially the older, coal-fired power plants came under increasing pressure due to the sharp rise in power from renewable sources, and frequently had to cut back production. They also sought refuge in increased exports,” says Dr. Patrick Graichen, Director of Agora Energiewende.

"Unfortunately, our coal power exports to neighbouring countries are displacing electricity in particular from climate-friendly gas power stations, as in the Netherlands, or - via the transit countries Austria, France and Switzerland - Italy," says Graichen. Compared to the same period a year ago, power exports in particular to France and Switzerland have clearly risen and those to Austria and the Netherlands have remained steady at a high level.