Agora Energiewende presents an agenda for the energy transition by 2030

“The Big Picture” describes trends, goals and measures for the second phase of the transformation of the energy system/In addition to the electricity system, transport and heating supply face major transformations 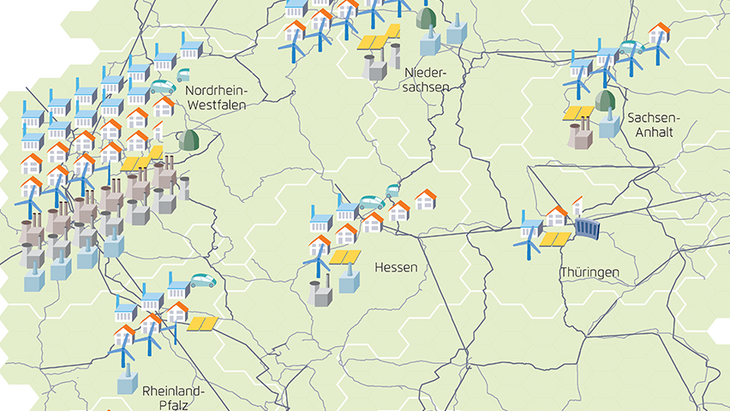 Agora Energiewende now has published the English Version of its vision for specific targets and strategies for the second phase of the energy transition in Germany. In the publication entitled “Energiewende 2030 – The Big Picture” (Energy Transition 2030 – The Big Picture), the think tank describes how Germany can achieve its climate protection target for 2030 (reduction of greenhouse gases by 55 percent compared with 1990) while also ensuring the supply security and keeping energy affordable both for consumers and industry. For the first time, it suggests specific energy policy targets for affordability, supply security, renewable energy sources and efficiency for all three energy sectors – electricity, heat and transport – for 2030.

Agora Energiewende calculates what the energy transition will mean specifically in 2030: doubling the percentage of renewable energy sources in primary energy consumption to 30 percent and in electricity consumption to 60 percent, halving the use of coal and crude oil, reducing the consumption of natural gas by 20 percent and reducing energy consumption by 30 percent overall compared with today. “2030 is an important milestone, as we must have achieved half of the targets of the energy transition by then if we are to reach the decarbonisation level agreed in the Paris Climate Agreement by 2050,” emphasises Dr. Patrick Graichen, Director of Agora Energiewende. “The good news is that the technologies needed to make the step to 2030 are all available at a low cost. However, there is also a challenging message: Now we have to do more than integrate a few wind and solar power installations, we have to comprehensively transform the energy sectors – electricity, heat and transport.”

In the second phase of the energy transition, energy efficiency will have to be prioritised far more than it has to date. Under the guiding vision of Efficiency First, all plans and investments for electricity, heat and transport must first be evaluated to ascertain whether energy efficiency might be the most cost-effective solution. “If climate action, economic efficiency and supply security are to succeed, far greater importance must be attached to energy efficiency than before. We could not even build the renewable energy sources and grids we would need without energy efficiency,” emphasises Graichen.

The “Big Picture” is illustrated with maps that show how electricity generation and energy consumption will change in the Federal States by 2030 compared with 2015, and illustrations that show the effects the transformations could have in rural areas, in cities, for the industry and in lignite mining areas as examples. “As we can see, we will still be in the middle of the transformation process in 2030: in addition to new wind and solar power installations, we will still have fossil fuel-fired power stations creating supply security, but they will run far less frequently. We will have 10 to 12 million electric vehicles, especially in cities, but the combustion engine will remain very common in rural areas in particular. Half of all buildings will have been refurbished, many buildings will source their heating from high-efficiency heat pumps – but just as many will still be heated with gas or even with oil in some cases,” says Graichen.

“Due to the significant decrease in costs for renewable energy sources and batteries, the energy transition has now become a competition between nations,” explains Patrick Graichen. “Many regions worldwide are now accelerating the expansion of wind and solar power significantly, while some – like China and California – are about to overtake Germany. As a result we must not slack off now; we should back the energy transition with an industrial policy to enable Germany to benefit from the rapidly growing global market for energy transition technologies.”

The study is available below as a free download.