2017 marks the first year in which more electricity in Europe was generated from wind, sun, and biomass than from coal 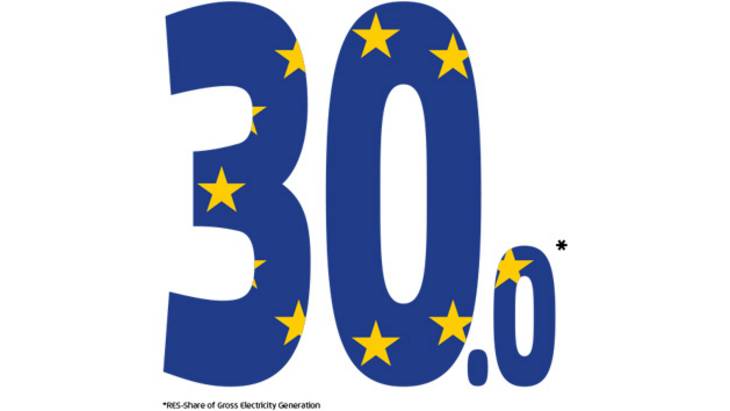 In 2017, wind, sun and biomass, in the European Union have for the first time delivered more electricity than hard coal and lignite combined. Electricity generation from these “new renewables”, which only really saw large-scale uptake beginning in 2000, grew by 12 percent last year. Since 2010, the share of wind, solar and biomass electricity in the EU has more than doubled. However, because hydropower production fell sharply in 2017, renewable electricity only achieved a slightly higher share in the EU than in the previous year, rising from 29.8 to 30.0 percent of electricity production. This is shown by analysis of two think tanks: Sandbag from Great Britain and Agora Energiewende from Germany. The authors of the study have compiled and evaluated public data from numerous sources.

The analysis also shows that the share of renewables in the various EU countries is growing very unevenly. In the past three years, for example, the United Kingdom and Germany have contributed to more than half of the increase in renewables - wind energy in particular is playing a major role here. In Germany, in 2017, 30 percent of the electricity was generated from wind, solar and biomass, and 28 percent in the United Kingdom. The strongest percentage growth was recorded in Denmark: in 2017, 74 percent of the electricity produced there came from wind, solar and biomass, a rise of seven percentage points. The strong growth in a few countries is contrasted with very low growth in many other EU countries: anaemic growth throughout the decade can be observed in Slovenia, Bulgaria, France, Slovakia, the Czech Republic and Hungary. Other countries had good growth at the start of the decade, but then gave up on renewables with almost no growth in the last three years, like Spain, Italy, Portugal, Belgium and Greece. Exceptions are Croatia and Romania, where the share of power from wind, solar and biomass has been growing since 2011 from low single digits to 18 (Croatia) and 16 percent (Romania), respectively. Six countries still had less than 10 percent of their electricity production from wind, solar and biomass in 2017: these are Slovenia (4%), Bulgaria (7%), France (8%), Slovakia (8%), Czech Republic (8%) and Hungary (10%).

On fossil energy, the development is mixed. Hard coal power generation fell by 7 percent because of higher wind generation, and with coal phase-outs announced in Netherlands, Italy and Portugal, hard coal generation will continue to fall. However, lignite generation rose slightly, and retirements are scant; meaning the route away from lignite is far from assured.

Despite the increase in wind and solar energy, the CO2 emissions of the European electricity sector did not fall in 2017, remaining stable at 1,019 million tonnes. A combination of three factors has led to this: Firstly, the production of electricity from hydropower has fallen to a Europe-wide low, mainly due to low rainfall and snowfall. Second, nuclear power plants in France and Germany delivered less electricity than in previous years. And thirdly, electricity consumption in the European Union has grown for the third year in a row: It rose by 0.7 percent in 2017. As CO2 emissions have even risen beyond the electricity sector, the authors forecast emissions within the EU Emissions Trading System (ETS) rose for the first time since 2010, from 1,750 million tonnes in 2016 to 1,756 million tonnes. However, oil and gas consumption outside the EU ETS also rose, so Sandbag and Agora Energiewende forecast a rise in total EU greenhouse gas emissions of around 1 percent.

"Progress on renewables has been increasingly reliant on the success story of wind in the UK and Germany, which has been inspiring. They demonstrate that if all countries in Europe engage in the energy transition, 35 per cent renewable energy by 2030 is entirely feasible. Solar deployment, however, is surprisingly low, and needs to increase in line with the massive fall in costs", says Matthias Buck, Director of European Energy Policy at Agora Energiewende.  "And with electricity consumption rising for the third year, countries need to reassess their efforts on energy efficiency, " adds Sandbag analyst Dave Jones. "But to make the biggest difference to emissions, countries need to retire coal plants. We forecast Europe’s 258 operational coal plants last year emitted 38 percent of all emissions under the Emissions Trading System, or 15 percent of total EU greenhouse gases. " In 2017, Netherlands, Italy and Portugal added their names to the list of countries to phase-out coal. "This is great. We need a fast and complete coal phase-out in Europe: the thought of charging electric cars in the 2030’s with coal just doesn’t compute ", says Jones.

In order to achieve the EU's 2030 renewable energy target, the EU will need to increase its efforts in deploying renewables in the coming years compared to recent trends. "Especially in Central and South-Eastern Europe, but also in Spain and Greece, much more is possible because the climatic conditions favour renewable energies," says Buck. Agora Energiewende has recently proposed a guarantee program to significantly reduce the financing cost for renewable energy projects in these countries.

The analysis from the report "The European Power Sector in 2017" was presented today in Brussels. An extensive data set with all numbers used in the publication has been compiled as an Excel file. Both the report and the Excel file are available for free download further below.