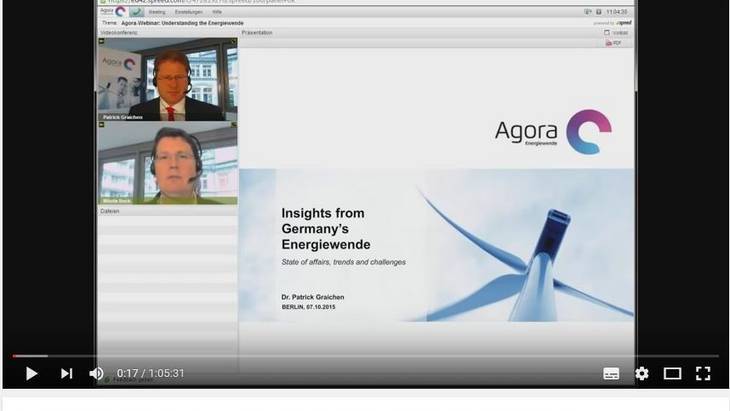 Energy systems worldwide are entering a phase of transformation. Germany is playing a prominent role in this context, having adopted one of the most ambitious energy transition programs of all industrial nations – the Energiewende.

With this long-term strategy, the country has decided to fundamentally transform its power sector, phasing out nuclear and coal in favor of renewable energy. While wind, solar, hydro and biomass energies were niche technologies in Germany in the year 2000 – with a renewables share of 6 percent in the power mix – they have risen to 30 percent today and are to be ramped up to at least 80 percent by 2050.

The German approach is not unique but the speed and scope of the Energiewende are exceptional, attracting wide attention in Europe and abroad. The debate revolves questions such as:

•    Why does Germany rely on renewable energy?
•    How can a power system be based on the variable energy sources wind and solar?
•    What are the costs and benefits of the German energy transition?
•    Is coal making a comeback?
•    And finally: Is Germany a special case or is this approach replicable?

As part of the release of a new background paper called “Understanding the Energiewende. FAQ on the ongoing transition of the German power system” Agora Energiewende offered a webinar by Patrick Graichen, Director of Agora Energiewende. In the course of the webinar Patrick illustrated the ongoing transformation of the German power sector, its current status, main insights and forthcoming challenges. Additional questions from the audience – some 180 persons from all over the world – were addressed during the Q&A session at the end of the webinar.

The publication as well as the slides shown during the webinar may be downloaded below (English and German version). The video may be watched on YouTube by using either the link on the right or on top of this entry.