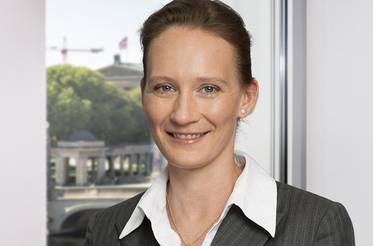 Alexandra Langenheld is the Lead Efficiency Policy at Agora Energiewende and in this role responsible for cross-organizational work on energy efficiency, including electricity, heat, industry, as well as European and international activities.

Before joining Agora Energiewende Alexandra Langenheld worked for the European Commission from 2006 to 2012 - initially seconded from the German Federal Environment Ministry as National Expert "Renewable Energy and Energy Efficiency" to the Directorate-General for Energy and Transport in Brussels and from 2009 as Energy Policy Analyst at the Joint Research Centre in Ispra, Italy. In these roles, she was inter alia instrumental in the design and negotiation of the EU directives on the promotion of renewable energy and energy efficiency, and advised the Member States in their National Action Plans. She was leading the coordination of international relations, especially to USA, Canada and Brazil. Between 2001 and 2006 she worked for the Department of Climate Change and Renewable Energy of the German Environment Ministry and as a research associate at the Technical University of Berlin on renewable energies and sustainable transport.